Hi friends! Today in our Gardening Adventures we’re gonna talk about an endeavor for which I have planted seeds. Ha HAH! Get it? Yeah, you get it.

I don’t remember if I mentioned this previously, and I’m not going to go back through the archives and look because….I’m not. It’s a life choice and I’m proud of it. This past autumn I collected some seeds from the big red-leaf Japanese maples in our yard, and refrigerated them over the winter to stratify them. In February the majority of them started germinating (ie: exposing their wee white taproots, honestly it was embarrassing 😉 ) so I’ve transitioned them to their seedling bed.

Japanese maples?! I hear you shout. WTF??? Weren’t you growing tea?!!! WHAT’S HAPPENING IN THE WORLD?!

Yes! And still am – the lemon balm has come back spectacularly and CES Jr MADE IT THROUGH THE WINTER WITHOUT DYING!!! Very exciting. Don’t talk to me about the fucking lavender. But now I’m also growing Japanese maples because – because, dear readers – I HAVE A DREAM.

I wanna run a tree nursery! A backyard one at first, but hey, who knows what the future holds. Right now, my focus is on Japanese maples and dogwoods, and I’ll tell ya, the dogwoods haven’t sprouted yet and I think I may have fucked those up for this year. I didn’t peel the red pods off the seeds before stratifying in the fridge, which has probably caused the seeds to rot in there, and while I HAVE planted them in a seedling bed anyway there are ZERO signs of anything happening. Sooooooo…..next year we’ll try that again.

But the MAPLES, dear reader, THE MAPLES!! LET ME SHOW YOU!

I KNOW, RIGHT?!!! Hahaha, okay, so those are the little fuckers on February 26, 2020. That was the day I transitioned them from the fridge to the seedling bed, which is a fantastically official PLASTIC BIN WITH DRAINS IN THE BOTTOM. It’ll be fine.

Now, you know me and frosts, right? So of course like 3 days after I plopped these fuckers in their bed and covered them gently, WE GOT THE LAST FROST OF THE SEASON. This bin was outside. I FEARED ALL WAS LOST.

Fast forward to daily checking and cussing and then on MARCH 7, check it oooooout:

BAM! Seedlings! And guys, lemme tell yah, once these fuckers got started they did not disappoint. By March 12 I had to take the lid off the bin for good because the first seedlings were bumping their heads on it; and now they had friends! 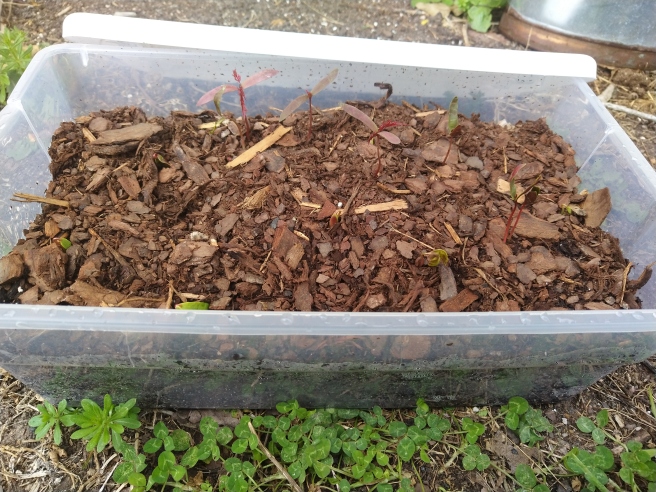 March 15 (shown above, I think I’ve screwed up where I’m gonna label dates (before or after pic) but whatever, y’all are smart enough to figure it out) we had more seedlings PLUS the first fuckers were stretching out some true leaves! And then….and then it started raining.

So I didn’t go out and take pictures.

WOW! Right? WOW! Lookit those leeeaves! There are like 13 of these guys reaching for the sky. One is showing some weird spots on its seed-case-leaves, soo we’ll keep an eye on that….but honestly I’m excited to see what these fuckers do.

I expect that they’ll be at a sellable size around 3-4 years old, so expect a series out of this! This year they’ll stay in the seedling bed. Then when they go dormant in the fall/winter I’ll separate them out into 1 gallon nursery pots.

OK OK, I hear you say, so that’s seedlings. But what if I want a tree that’s guaranteed to look just like its parent? WELLLLLLL for that you need a graft or a rooted cutting.

I legit DO NOT KNOW WHY I keep trying to root cuttings. I suck at it. There’s something I’m just not doing right, and everything I change doesn’t seem to help. But yeah, I took cuttings from our established red leaf Japanese maples too. And I put ’em in rooting hormone and I didn’t let ’em dry out and you know what the fuckers still haven’t leafed so who the fuck knows. The camellia I also tried has given right the fuck up. We’ll see what the maple cuttings ultimately do because they aren’t “DEAD” yet…..they’re just not leafing yet. Maybe I’m just being impatient. It’s gotta be hard to grow roots AND leaves, right? RIGHT??

I am an editor for HCS Publishing, a very unique independent publishing house that's based in Gloucester, VA. We look for stories that are exceptionally well told, and steampunk elements are always a plus. Check us out at hcspublishing.com and you might see my name on some books, as I'm an author too. My fantasy novellas "Civil Dusk" and "First Watch," and my historical fantasy novels "Hollow Thunder" and "The Loyalty of Dew" are available on amazon.com (and the Buy My Books link in my blog here) and my short stories have been featured in two anthologies from HCS Publishing. View all posts by Nicole R. Ordway